Master Sheng Yen was born in 1930 in a farmer’s family in Nantong County, Jiangsu Province. His family name was Zhang. At the age of thirteen he became a monk at the Guangjiao Temple in Langshan. At that time, he had only completed the fourth grade of primary school. He performed Buddhist ceremonies in a monastery in Shanghai and studied for two years at a Buddhist academy. He joined the army in 1949 and followed the government to Taiwan. After ten years of service, he retired from the army and resumed life as a monk under master Dongchu. Shortly after Master Sheng Yen became a monk for the second time, he spent six years in seclusion in the Meinong Mountains of Kaohsiung where he dedicated himself to scriptural study and wrote nine seminal works, including “Comparative Study of Religion” (比較宗教學), “Essentials of the Study of Buddhist Discipline” (戒律學綱要), and “Orthodox Chinese Buddhism” (正信的佛教). At the age of thirty-nine, he traveled all the way to Japan to further his education at Risho University in Tokyo. In six years, he completed a master’s and PhD degree in Buddhist literature. 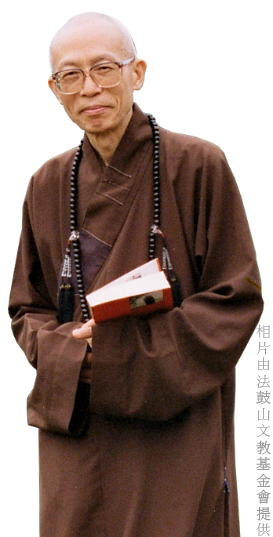 From East to West

After Master Sheng Yen completed his PhD in 1975, he was invited back to Taiwan to attend the 4th meeting of the National Development Association as an overseas scholar. He was subsequently invited to teach in the United States, serving as the director and vice president of the American Buddhist Association, the abbot of Dajue Temple in New York, and the director of the Taiwan Buddhist Translation Institute. Following Master Dongchu’s passing away in 1977, Master Sheng Yen returned to Taiwan from the United States to serve as the head of the Chinese Buddhist Cultural Center. The following year, he applied for the position of director of the Institute of Buddhist Studies and professor of the Institute of Philosophy at the Chinese Cultural Institute, also teaching at Soochow University and Fu Jen Catholic University. In response to the enthusiasm of his American disciples in seeking the Dharma, he established the New York Chan Meditation Center in 1979. From then on, Master Sheng Yen traveled regularly to and from the United States and Taiwan to promote Buddhism, frequently travelling to various locations in Asia, America, and Europe to spread the Dharma.

In addition to guiding the practice of Eastern and Western people with his extensive meditation experience and correct meditation concepts and methods, the Master held seven-day Chan and Pure Land retreats across Asia, America, and Europe every year. He produced both academic and popular writings to expound the Dharma, publishing more than 100 books in Chinese, English, and Japanese.

Master Sheng Yen was dedicated to promoting Buddhist education. By 2006, The Chinese Buddhist Research Institute he founded had enrolled students in its programs for 26 years, with many of its students going abroad upon graduation and receiving a doctorate degree from famous foreign universities before returning to Taiwan.

Master Sheng Yen was also a well-known Buddhist scholar who frequently attended international academic conferences. Beginning in 1990, he has held the Chung-Hwa International Conference on Buddhism every two to three years, with the theme of "Buddhist Tradition and Modern Society,” bringing together outstanding Buddhist scholars from all over the world to discuss how to implement Buddhism into modern society and tackle the growing crises of the modern world.

Due to the rapid development of the various educational, Dharma, and cultural undertakings at the Chung-Hwa Institute of Buddhist Culture and Nongchan Temple, the original site in Beitou, Taipei, had become insufficient. In 1989, a plot of land in the mountains of Jinshan, Taipei County, was bought and named "Dharma Drum Mountain." This beautiful hillside environment would be the site of the future Dharma Drum Mountain World Center for Buddhist Education, with facilities for Dharma study and practice, academic research, and lifelong learning, implementing the vision of “uplifting the character of humanity and building a pure land in the world." The Dharma Drum Mountain Inauguration Ceremony was held in 2005 following the completion of the first phase of the construction project.

With Dharma Drum Mountain as his base, Master Sheng Yen spread Buddhism while adapting his teaching to the language and concerns of modern people, promoting "Spiritual Environmental Protection,” "the Four Kinds of Environmental Protection,” "the Fivefold Spiritual Renaissance,” and "the Six Ethics of the Mind," providing concrete and practical methods for modern people to implement. In order to further promote cultural, educational, and Dharma endeavors, he held talks with leaders in the fields of science and technology, art, culture, etc., also engaging in dialogue with representatives of different religions. His open-mindedness and international vision have won him praises at home and abroad from all segments of society. In recent years, the Master has devoted himself to the work of international promotion, participating in international talks, promoting religious exchanges, advocating the establishment of global ethics, and devoting himself to world peace.